About 5 years ago my friend Jason raised the idea of training toward the goal of climbing Denali, North America’s tallest mountain. At the time our experience amounted to a few weekend mountaineering trips to Mt Shasta. Going from that to a 3 week long expedition sounded like a huge hurdle to overcome. Nonetheless without much persuading, Jason got me and our friend Brent to join the team. Over the course of the following year we spent a lot of time researching and training to bolster our confidence. By late May 2018 we were riding a bush plane to the mountain. We got to high camp and made a summit attempt, but turned around due to weather conditions. We ultimately opted to end our ascent due to waning willpower and for what seemed a likely cold injury.

This past season my two teammates trained for a return to Denali and reached the summit a few days ago. I didn’t join them due to schedule conflicts, but have eagerly followed along with their progress. During the 2018 trip Jason’s wife Beth published a blog which tracked our day by day progress at https://climbing.ogasian.com/denali-2018. Their 2022 expedition progress is also documented there. This led me to reflect on our 2018 trip, which will be the meat of this post.

Like any Type-2 fun adventure, as time goes on the memory of the sufferings fade away while the triumphs brighten. Thinking back, it all seemed like a great time. But was it? Luckily we took photos and I jotted notes each day of the journey to try and capture the reality. We also have messages and mapshare from my Garmin Inreach (satellite messenger) which was shared with some friends and family at the time. Select photos and nearly unabridged notes (bulleted) taken from 2018. The rest is my current commentary.

First off, an overview of my Denali mapshare messages. These are the live updates that most folks following along saw during the expedition. 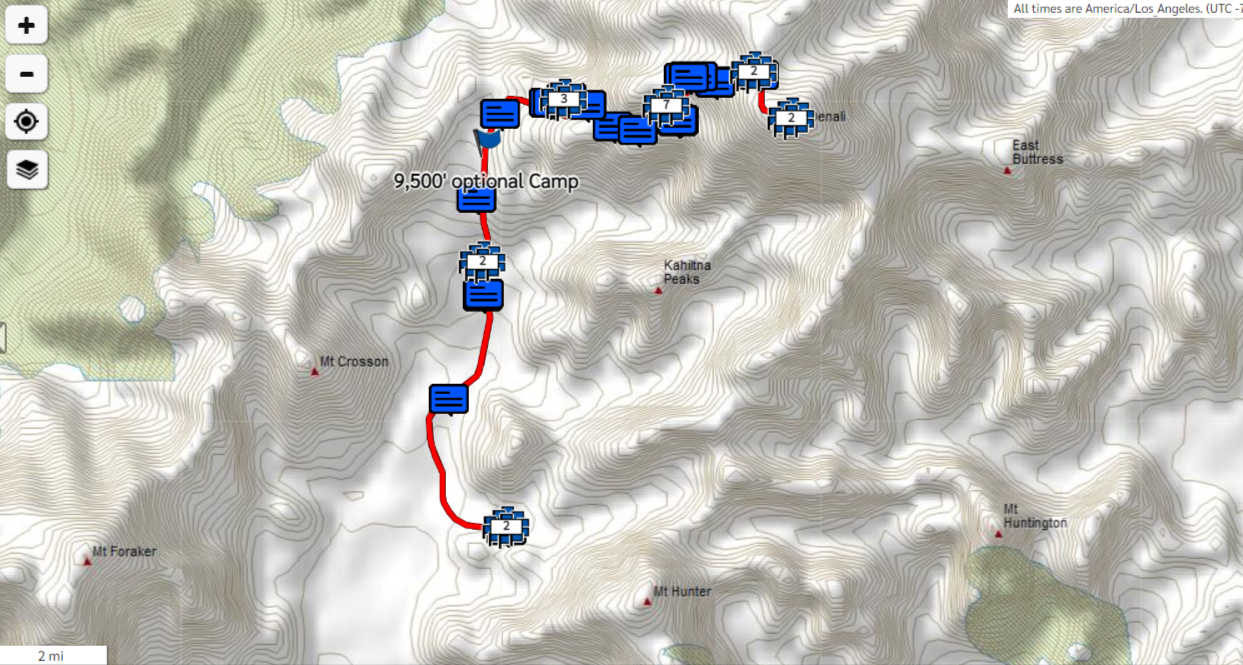 We didn’t know it then, but we were ahead of the curve; Wearing masks on a plane back in 2018, before it was cool mandatory.

Be prepared, the notes suffer from a lot of typos. These were all taken in an offline mode google doc on my android phone on the mountain.

Later on the mountain we heard from one of the other teams that their pee bottle broke in their sleeping bag.

We had one crazy dinner that was something close to 2000 calories of mashed potatoes per person. It was an unreasonable challenge.

Don’t remember where I got the tube hydration note, but none of us had one. Probably saw some other guy. I still use a straw in my bottle.

One of the bigger moments of doubt. My sleeping pad was flat each morning.

Watching other climbing groups was frightening.

Mark Smiley is a well known guide. We trained with some of his online videos and somewhat tracked his itinerary on the mountain.

Missing from photos and notes thus far are the snack breaks. Dosage: handful of peanut M&Ms every half hour. Never got old.

Apparently not much of note this day.

Despite the dead sleeping pad, the cold and cushion wasn’t bad at night.

In retrospect, given the above, we pushed too aggressively. Should have taken another rest day…

Fall was a couple feet maybe, not much. We were exhausted and turning around was the right call.

I still remember my glove starting to roll and keep rolling and rolling down.

Arms out the pit zips was one of my top style takeaways.

One of our top ethics for the climb was to do it safely without injury. After learning that the summiteers that day got frostbite, and given our brush with frostnip, our choice to turn around was the right move.

So, was it a great time? Like memories, the photos and notes don’t transfer too much of the struggle. I’m pretty certain there was a lot of struggle, but the feeling is far removed now. With that all in the past, I’d say the price was well worth it. Ultimately this review did little to temper the feeling of missing out on Denali take 2.

One thought on “Denali Expedition 2018: a very late retrospective”